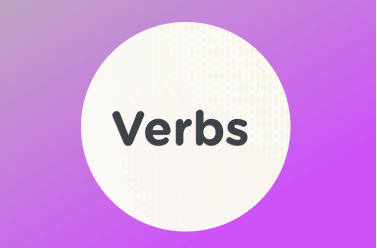 Verbs are doing words. They describe actions or states. Verbs tell us about what things do or what they are like. Some examples of verbs are: run, walk, work, eat, think.

Along with nouns, verbs are the building blocks of English. If we have a noun and a verb we can make a simple sentence, for example: Lisa runs.
Most verbs describe actions but some describe states. These are called state verbs or stative verbs. Some examples are: like, know, feel, belong, cost and be.

What are the most common verbs in English?

Very common verbs, verbs that we use a lot, are sometimes called hot verbs, because they never get a chance to cool down. Some hot verbs are: be, do, have, go, see, give, take, make, put, say and get. These verbs are used as main verbs in sentences as well as to form phrasal verbs and to act as auxiliary verbs. Phrasal verbs, sometimes called multi-word verbs, are verbs made up of two or three words which often have many different meanings. We will look at phrasal verbs in another blog post.

What are auxiliary verbs?

Auxiliary verbs are simply verbs that help the main verb in a sentence. We can call them “helping verbs”. We use them to make questions and negative sentences as well as to form some tenses. If we want to make “Lisa runs.” negative, we can change it to “Lisa doesn’t run.” by using a form of the helping verb “do”. We also use a form of “do” to make a question such as “Does Lisa run?” The helping verb “have” and “be” are used to form some of the different tenses in English.

What are regular verbs?

Most verbs in English are regular. This means that they all follow the same pattern in the way that they change into the three main forms which are used to construct the various tenses. However, most of the most commonly used verbs, the hottest verbs are irregular. You have probably learned about irregular verbs before. They are the ones where we have to learn three forms and repeat them. Some examples are eating, ate, eaten and give, gave, given. There is not really any other way to learn how they behave other than repeating the words like a parrot. Regular verbs simply add “ed” for the second and third forms of the verb (walk, walked, walked).

What are irregular verbs?

When you learn the three forms of an irregular verb, for example, take, took, taken– you are learning the infinitive form, the past simple form and the past participle. These names seem a bit difficult at the beginning but it is helpful to know what they are called because it will help you in learning the more advanced tenses and grammatical structures.
The most irregular verb in English is “be”. This is the case in many languages. “Be” is the only verb which has an infinitive form different from the first person singular form of the present simple tense. When we talk about a form of “be”, we mean “am”, “are” and “is” and in the past tense, “was” and “were”.

When we use verbs in English, we change the form of the verb depending on the tense. The tense is a combination of time (past, present, future) and aspect (simple, continuous, perfect). There are twelve basic tenses in English as listed below with the regular verb “to walk”:

You can see how the auxiliary verbs “be”, “have” and “will” are used to help form continuous, perfect and future tenses. It might look very complicated. However, the way the different tenses are formed is actually quite logical and regular and it will become clear as you study each one how and when we use them.

Learning English verbs is easier than you thought!

Believe it or not, English verbs are actually much simpler than many other languages because we don’t change the ending of the verb in every case, according to the number and person of the subject, as many languages do. This is one of the reasons that English has become an international language. Please remember that English lessons tend to focus on the more difficult aspects of the language. Most elements of English are straightforward and easy to pick up so don’t need to be taught.

How to Learn Verbs

What is the best way to learn verbs?

Good question. Verbs and nouns are the most important words in English, the building blocks that contain most of the meaning. It is quite easy to learn most nouns by putting labels on objects or looking at picture dictionaries. You can point to something, or a picture of something and repeat the name of the thing and keep testing yourself until you know it. Verbs are not so easy, They are actions. You can’t see them. You can’t pin them down and put a label on them like a noun. They move and change and are tricky to define.

What is a word family?

A word family is a group of words that share a common root so deal with the same specific area of meaning but function as a different type of word or “part of speech”, for example, nouns, verbs, adjectives and adverbs.

When learning verbs it can be helpful to learn them as part of a word family. Everyone learns and remembers new information differently so do what works best for you. Some people like to keep a vocabulary notebook with words grouped in lists while others use drawings or “mind maps” to help them make connections in their thinking. There is no right or wrong way.

Let’s look at an example of a word family. Students study. “Student” is a noun.  “Study” is a verb, It can also be a noun, meaning a room in someone’s house to study in. The adjective “studious” and the adverb “studiously” belong to the same word family. Learning new vocabulary in a word family is efficient and effective. It gives you several pathways to remember the words.

How do I learn irregular verbs?

Most verbs are regular and we don’t need to learn the pattern of endings that they use in past tenses because we simply add  “-ed” to the base verb. Irregular verbs need to be memorized. There are not a lot of irregular verbs but they are very common verbs that we use every day. By definition, irregular verbs don’t follow a consistent pattern like regular verbs so we have to learn the patterns in order to use them correctly. Most English language-learners do this with the help of a simple list or chart which gives the three forms of the verb, for example, “eat, ate, eaten” or “take, took, taken”. Sometimes there is repetition within the three forms, for example, “come, came, come” or “bring, brought, brought”.

When you first learn English, you need to learn these three forms of a verb by reciting them with a rhythm and by testing yourself until you know them all “off by heart”. We call this “rote learning” or learning “parrot-fashion”. It might feel childish, like learning your multiplication tables but it really is the only way to get these irregular verb forms locked in your head until they are a natural feature of your English.

The three forms of an irregular verb that you learn by reciting these groups of three words are called the infinitive, the past simple and the past participle. You really need to know all three of them for all irregular verbs to be able to communicate effectively, as they are the verbs that we use most often. Soon they become second nature. Learning irregular verbs is the first step. Once you know them, you can form all of the tenses for any verb in English.

How do I learn different tenses?

Begin with the past simple. Most of the time we talk about the past so we use past tenses or narrative (story-telling) tenses. These include past simple, past continuous, past perfect (less common) and present perfect.

A native-speaker doesn’t need to learn the jargon because they simply copy what they hear their parents and older children and adults say. They master grammar by imitation and trial and error. Adult learners, however, usually find it helpful to understand at least basic grammar so that they can work out what errors they are making and how they can improve.

Past participles (walked, ate) are used with has, have and had to make “perfect” tenses.

Present participles (walking) are used with forms of be to make “continuous” tenses.

There is a lot to learn but these simple example sentences will get you started.