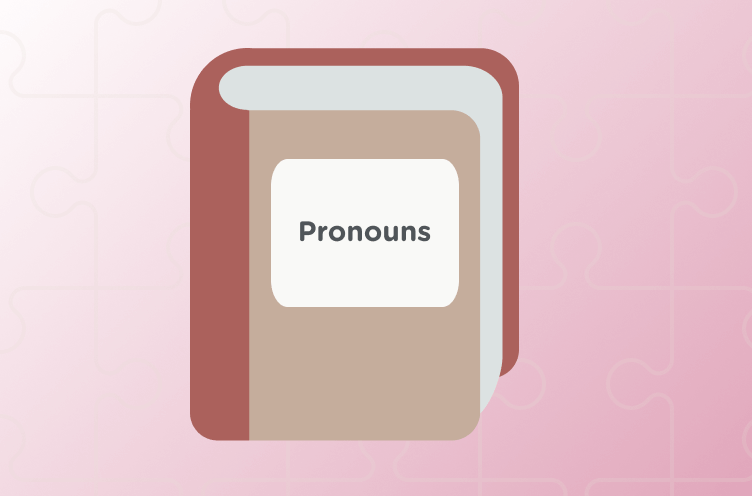 What is a pronoun in English grammar?

In English Grammar, Pronouns take the place of a noun. They stand in as a substitute for a noun and so avoid the need to keep repeating nouns or noun phrases. In the first sentence in this blog, “Pronouns” is a noun whereas, in the second sentence, “they” is a pronoun, standing in for the noun, “Pronouns”. Pronouns are short, easy-to-use and useful.

What are the different types of pronouns?

Subject pronouns take the place of the subject of a sentence: I, you, he, she, it, we, they.

Object pronouns take the place of the object of a sentence: me, you, him, her, it, us, them.

Sometimes people, and this includes many native English speakers, use the wrong pronoun when they are putting two subjects or two objects together.

An easy way to check is to drop the name of the other person and see what the sentence sounds or looks like. For example “ Me went to the movies” and “Steve invited I” sound very strange because they are wrong.

There are several other types of pronouns, including possessive pronouns (mine, yours, his, hers, ours, yours, theirs), demonstrative pronouns (this, that, these, those) and relative pronouns (who, which, that, where, when, whose, whom). We will look at these in detail in later blogs.

In my opinion “whom” is old-fashioned and very rarely used. People sometimes try to use it to sound well-educated and this often fails because they use it incorrectly. It is difficult to use it appropriately. My personal advice is to avoid it. I think it is obsolete. Use “who” instead. It is perfectly acceptable these days.

Sometimes a pronoun can stand for a whole phrase. The pronoun “it” in the previous sentence stands for “using ‘who’ instead of ‘whom’”. We can also use a pronoun as an “empty’ or “dummy” subject in sentences such as “It is sunny”, where we know that “It” refers to the weather.

A common mistake that students make is using both a noun and a pronoun in the same sentence. We can’t do this in English whereas it is common in many other languages. We can say, for example, in two sentences: “I met your sister. She is really nice.” We can’t say, however, in one sentence, “Your sister, she is really nice”. It is probably okay to say this when you are speaking but you certainly can’t do it when writing. In English, a verb only has one subject, either a noun or a pronoun, but not both in the same sentence.

Another problem with pronouns in writing happens when it is not absolutely clear who or what the pronoun is referring to. It is always important to remember that in written English, you know exactly what you mean but the reader won’t necessarily interpret it the same way. In other words, the reader can’t read your mind.

If you write, for example, “I bought some earrings, jeans and a box of chocolates. They were very expensive”, it is not clear to the reader whether it was the chocolates or the jeans or the earring, or all of them, which were expensive, because all of them can be represented by “them”. Sometimes the context makes it clear. If, for example, you said “I lost them”, then “them” probably refers to the earrings because they are the most likely to be lost. If there is any chance of confusion with a pronoun, use the original noun or a synonym instead. Sometimes if you keep repeating “it” many times, it is better to repeat the noun at least once to make sure the thing that you are referring to is clear.

When you begin a new paragraph, it is usually better to use the noun rather than a pronoun. You can see an example of this in the paragraphs about relative pronouns and “whom” above”. If the second paragraph on that topic had used “it” again instead of “whom”, it would have been easy for the reader to lose track of what I was saying.

Pronouns are really useful for avoiding repetition but we need to be sure that we are being clear when we use them.