How to learn English phrasal verbs 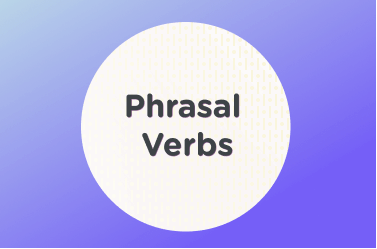 What is a phrasal verb?

Phrasal verbs have two or three words and two or more meanings.

They usually have at least one literal meaning, for example “She took off her coat” (removed an article of clothing) or “The librarian took the book off the shelf” (lifted an object from a surface) or “The plane took off” (left the ground).

They also have at least one metaphorical or idiomatic meaning, in other words, a kind of secret meaning which is not immediately obvious from the meaning of the verb and the additional preposition or prepositions, for instance:

Phrasal verbs are challenging to learn because there are any meanings for each one, often unrelated and because their meaning is not always apparent from the two or three words that comprise them.

Furthermore, phrasal verbs are often made up of very commonly used “hot” verbs such as make, take, do, get, put,  give. These verbs are used so commonly that it is hard to identify their meaning in a particular context. In some ways, they have little or no meaning in themselves. Their meaning is defined by the context in which they are used and by the prepositions with which they are teamed in the case of phrasal verbs.

Think of each phrasal verb as a single item of vocabulary. Learn it as a chunk. As a chunk it has different meanings from the individual parts.

Learn phrasal verbs in context. Write and record example sentences that make it clear from the surrounding situation what the meaning is. You can also record a one-word synonym or a synonymous or parallel phrase in English or a translation to your own language if absolutely necessary. It is better to do all vocabulary note-making and learning solely in English if you can.

For example, if you want to learn the phrasal verb “to make up”, you could write example sentences with clear context with a synonym embedded in brackets, like this:

Interestingly, these days, we don’t usually say that someone is making up her face. It sounds unusual, probably because of the wide variety of meanings of the phrasal verb, “make up”. We would say that she is “doing her make-up” or “putting on her make-up”. When a phrasal verb like “make up” evolves to become a noun, we write it with a hyphen, like “make-up” (cosmetics), “take-off” (plane departure) or “lift-off” (rocket launch).

Phrasal verbs are used widely in speech and much less frequently in writing. Movies and TV series are excellent resources for learning phrasal verbs. Watch with English subtitles so you can read the phrasal verbs when you hear them and make the association between what you hear and what you read.

Fluent English speakers run words together, especially idiomatic language such as phrasal verbs so when you are listening or watching without English subtitles it can be challenging to determine where one word ends and the next one starts. You will probably come across instances where a phrasal verb in a particular context is completely baffling. There are many phrasal verbs that use quite uncommon verbs and even those with common verbs can be difficult to grasp the meaning of when embedded in a stream of speech.

Stop the video or write down the phrasal verb that you don’t understand and look it up. Be prepared to spend time doing this because there may be ten or more meanings for a phrasal verb and you will need to do some detective work to figure it out.

To sum up, think of phrasal verbs as chunks of language. If you learn them in context, you will pick them up. Hang in there. Don’t give up.

Ep. 11 English Grammar – The importance of Modal Verbs with Andrea