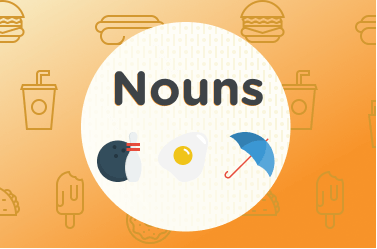 What is a noun?

Nouns are naming words. They name things, places, people, animals and so on. Every language has nouns. There are many nouns in English. Everything has at least one noun that names it. We need nouns so that we have a way of talking about things. If we know the name of something, we can talk about it with someone and know that the other person knows what we are talking about.

What is a concrete noun?

Some simple, common nouns are “table”, “kitchen”, “brother” and “dog”. We can call these kinds of nouns “concrete nouns” because they name something that is real and solid, like concrete, that we can point to or touch.

What is an abstract noun?

Abstract nouns name something that we can’t point to or touch, for example feelings such as “happiness” or general ideas such as “government”. The endings, or suffixes, “-tion” and “-ment” usually help to form an abstract noun.

What is a countable noun?

Most nouns are able to be counted so we call them “countable nouns”. When there is more than one of something we usually change the form of the noun from singular to plural by adding “-s” to the end of the word, for example, “two chairs”, “three rooms”, “four sisters’, and “five elephants”. A small number of nouns have irregular plurals. Instead of using “-s”,they have a different ending to show that there is more than one. Some common examples are “two men”, “three women” and “four children”. A very small number of nouns don’t change at all between the singular and the plural, for example, “two sheep”, “three fish” and “four deer”.

When we use singular countable nouns, we nearly always need to use them with an article (“a”, “an” or “the”) or with a possessive (“my”, “your”, “his”, “her”, “its”, “their”) or with a person’s name with an apostrophe, for example, “Brian’s banana”. Many languages, such as Japanese, Chinese and Russian don’t have articles so it is really difficult to remember to use articles, or possessives, every time that we use a singular countable noun, and to use them correctly.

What is an uncountable noun?

“Proper nouns” are the nouns that we write with a capital letter. They are the names of people (Margaret Smith, Tom Baxter), places ( New York, Mount Everest, Lake Victoria, New Zealand), subjects (Mathematics, Geography), nationalities (Mexican, Belgian) and languages (English, Thai). Proper nouns generally name something when there is only one of this thing or place or person, for example, the Eiffel Tower, Switzerland, Michael Jackson.

When do we use nouns?

A simple sentence can have just a noun acting as the subject of the sentence and a verb (a “doing word”). An example of a simple sentence is “I write”. If this sentence also has an object, the object will also be a noun or a noun phrase, for example, “I write this blog”.

Nouns, along with verbs, are the most important word types in English. The more nouns that you can add to your vocabulary, the more you will be able to speak and write and the wider your range of topics for conversation will be.

How do I learn nouns?

Everyone learns differently. Find the best way for you to remember new nouns when you come across them. I think it is usually best to try and associate the noun in English with the object or idea that it names rather than as a translation of a word in your first language. Babies and children learn nouns by pointing at things. Their parents and teachers name the object and the children repeat and remember. We learn English most effectively when we do it the same way as we learned our first language.

Some learners like to keep a vocabulary notebook, either a paper one or on their phone, to record new vocabulary as they learn it. Try to group words together in topic groups or word families. Try to write an English definition rather than a translation from your first language. The less you use your first language, the quicker you will learn new nouns in English, build your vocabulary and increase your ability to speak and write. You get better at speaking English by speaking English. It is like swimming. You get better at swimming by swimming. You don’t get better at swimming by riding a bicycle.