Indefinite Articles (a, an) 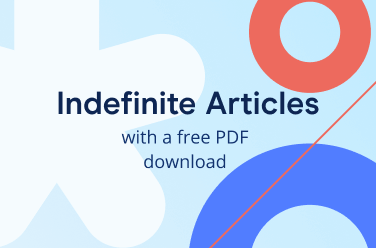 An indefinite article (“a” or “an”) is used with singular countable nouns when we mention something for the first time and also when it is unimportant which particular thing we are talking about.

What is an indefinite article?

An indefinite article (“a” or “an”) is used with singular countable nouns when we mention something for the first time and also when it is unimportant which particular thing we are talking about. A good example of mentioning something for the first time is when we order something in a restaurant such as “I’d like a steak, please”. After this first mention, we use “the”, for example, “I’d like the steak medium-rare, please”. When we ask for “a glass of water”, it is not important which glass.

“A” and “an” are the same. “An” is much less common as we only use it when a noun starts with a vowel sound. This is because it makes it much easier to pronounce. Try saying “a apple” rather than “an apple”. It’s not easy. It is the sound that is important, not the spelling. We say “a university” and a “uniform”, not  “an university” and “an uniform” because, although these words are spelled beginning with a vowel, they start with a consonant sound (/j/ ,which is like “y” in English).

The word “hour”, meaning sixty minutes is pronounced the same as “our”, the possessive adjective which is used to indicate that something belongs to us. The letter “h” at the beginning of “hour” is silent. However, we do pronounce the “h” at the beginning of “half”. Consequently, we say “an hour” and an hour and a half”. In some parts of the United States, “herb” is pronounced with a silent “h”. They say things like “Garnish with an herb like parsley” whereas most English speakers would say “a herb”. There are actually very few differences between British and American English.

Choosing between “a” and “an” with abbreviations can be confusing. We talk about “a Member of Parliament” but “an MP” because the way that we pronounce the letter “M” is /em/, which begins with a vowel sound. Similarly, we say “She has an MBA”, “He is an FBI agent” and “The sinking ship sent out an S.O.S.” The important thing is how we say the word or abbreviation, not how we spell it. When abbreviations are pronounced as a single word, we use either “a” or “an” to match the pronunciation, for example, “a FIFA official” and “a NATO general”.

Some learners say “one” where an English-speaker would use “a” or “an” instead. It sounds strange to say “There were five women and one man at the bus stop”. We normally say “five women and a man”. Another good example of this is with fractions. It is more natural to say “A third of the class failed the test” rather than “One third of the class failed the test.” This is also the case with big numbers that are written with “1”. We don’t say things like, “This dress cost one hundred dollars”, “There are one thousand people at my school” or “The house sold for one million dollars”. We say “This dress cost a hundred dollars” ,“There are a thousand people at my school” and “The house sold for a million dollars”.

Indefinite articles (“a” and “an”) are small and seemingly pointless. They carry very little meaning and have a grammatical function rather than conveying an important message. If you leave out an article in your speaking and writing, it is very unlikely to lead to any misunderstanding. It just sounds unusual. English-speakers may underestimate your English ability if you make mistakes with articles because, for someone who has grown up speaking English, they are very straightforward.

In the case of singular, countable, concrete nouns (which is, after all, the majority of them), you always need an article, either definite or indefinite or a possessive adjective. Plural, uncountable and abstract nouns don’t use indefinite articles. Plural nouns and uncountable sometimes use definite articles, when you are referring to something specifically. Abstract nouns don’t use articles.

If your first language doesn’t have words that operate like English articles, learning how and when to use articles can be very challenging for you. It may not be much consolation but at least English only has “a/an” and “the”, unlike many European languages which arbitrarily assign a gender to every object so you have to learn a particular masculine or feminine article along with every new noun you learn. In English it is always a simple choice of either “a/an” or “the” with any noun.