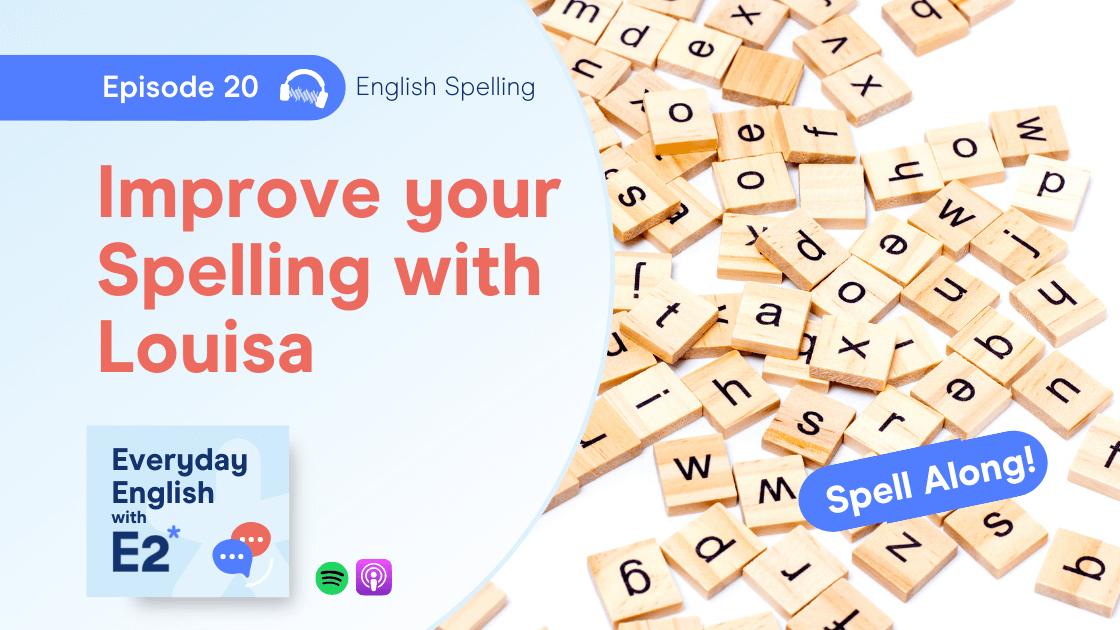 We are back with another episode of Everyday English with E2! Each week we focus on English grammar, vocabulary, pronunciation or spelling. This week we are focusing on a common English sound that can be quite tricky to spell correctly – the /k/ sound. You’ll learn a collection of quirky /k/ words with contrasting spellings, know a few spelling tricks, and quiz as you go. By the end of this episode, you will be able to spell the /k/ sound quickly and confidently!

Sign up to the E2 English FREE spelling course NOW at www.e2english.com

Hi, I’m Louisa, and welcome to another episode of Everyday English with E2, where each week we focus on English grammar, vocabulary or pronunciation. This week, we’re looking at spelling, and focusing on a common English sound that can be quite tricky to spell correctly – the /k/ sound. I’ll introduce you to a collection of quirky /k/ words with contrasting spellings, teach you a few spelling tricks, and quiz you as you go, so you can learn to spell the /k/ sound quickly and confidently!

Now, if you would like even more spelling practice after listening to this episode, head over to www.e2english.com and sign up for our FREE E2 English Spelling course.

Let’s start with the /k/ sound at the beginning of a word. If we’re spelling a word that starts with /k/, it will usually start with either a C or a K. But how do we know which one to choose? We can figure it out by looking at the letter that comes after the /k/ sound. Have a listen to these words:

If you said the letter C, you’re correct! Most of the time, words that have a /k/ sound followed by the letter A are spelled with a C. There are a few exceptions, like Kate or kangaroo, but 99% of the time you’ll be correct if you spell these /ka/ and /kɑ/ words with the letter C.

Now this is also true for words that have O or U as the second letter. Let’s listen to a few examples.

Which letter is at the beginning of all of these words? Yep, it’s the letter C. So now we know that words that have the /k/ sound followed by an A, O or U are almost always spelled with a C.

We also use the letter C before the consonants L and R, to make /​​kl/ and /kɹ/ sounds, like class, cleaning, cream and cricket.

Whoa, hold on! The word ‘click’ has a /k/ sound at the beginning AND the end, and they’re spelt differently – one with a C, and one with a C-K. But why, English, why? Don’t worry – as with all things in English spelling, there’s a rule for that. Let’s have a look at some words that end in a /k/ sound and see if we can figure it out.

Okay, so there are four ways of spelling a /k/ sound at the end of a word. We could use the letter K, the letter C, the letters C and K together, or the letters K and E together. We know the word ‘click’ ends with a C-K, so let’s have a look at a few other words with that same ending. Have a listen and see if you can identify any sort of pattern.

What about words with a longer vowel sound, like book, week or speak? These words are long enough without having to have a C-K on the end, so we just use a K. The same goes for words that have a consonant mixed in with the vowel sound, like milk, park or ask.

Then we have words that end with an E, like cake, joke or hike. The general rule is that if you hear a letter of the alphabet in a word, like A, cake, O, joke, or I, hike, there’s an E on the end of that word. And whenever there’s an E after a /k/ sound, what letter do we have to use? Well done if you remembered it’s the letter K! We have to use a K because a C and E together make the sound /s/, and we need a /k/ sound to spell words like ‘cake’. I mean, I’d be disappointed if my cake turned into a case – wouldn’t you?

And finally, we have two syllable words that end with a /k/ sound, like music, garlic and picnic. Did you notice that these words all start with a stressed syllable – mu-sic, gar-lic, pic-nic – and then end with an unstressed /ɪk/ sound? There are quite a few words in English like this and they all end with the letter C. So – if the /k/ sound isn’t stressed, just chuck a cool, casual letter C in there.

And here’s a little bonus for you – the /kw/ sound! It starts with a /k/, but this sound is almost always spelt with a Q-U in English. Think of Q like your clingy friend – it always wants to hang out with U! You’ll see Q and U together in a lot of common English words, like ‘question’, ‘quick’ and ‘quarter’.

Okay, here’s another common /kw/ word – quiz! It’s time to see if you remember those /k/ and /kw/ spelling rules. I’ll read out a word, then give you a few seconds to spell it out loud, and then I’ll give you the correct spelling afterwards so you can check. Ready? Here we go!

Quick. (3 sec gap) Quick, Q-U-I-C-K. Ooh, that one was a toughie! Hopefully you worked out that because it starts with a /kw/ sound, it’s spelt with a Q-U, and because it has a short vowel sound like ‘pick’ it ends with a C-K.

Logic. (3 sec gap). Logic, L-O-G-I-C. I hope you used your logic to compare this one to music and garlic and remember that those words end with the letter C.

Phew, those were a lot of different spellings of the /k/ sound. How did you go with the quiz? Did you get them all or are there a few rules you need to brush up on? Don’t stress if you got a few wrong – with practice, your English spelling will become so natural that you won’t even need to think about these rules. If you’re still struggling or would just like to get a bit more practice in, make sure you check out our free E2 English spelling course – that’s C–O-U-R-S-E – at www.e2english.com.

Thanks for tuning in, and don’t forget to subscribe to this podcast for more handy hints to improve your English. See you next time!

We are now on TIK TOK, practise live with Louisa!

In case you missed our last episode of everyday English with E2: