How to become fluent in English 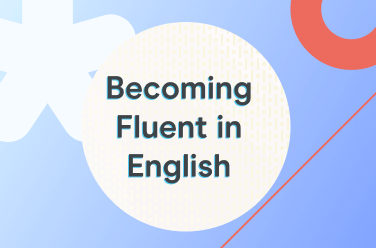 But how do you become fluent in English? Let’s find out…

To become ‘fluent’ we need to get better at speaking.

In English there are 44 single sounds. Some of these sounds use your mouth – like your teeth or lips or throat, and some sounds bypass all of your mouth.

They’re the 24 individual sounds. If you want to practice them all including listening and speaking exercise with AI scoring then check out E2 English’s Basic Pronunciation course, which uses our AI SpeakingLab.

Okay, but what about those sounds that DON’T use any part of your mouth – the air comes straight from your belly!

So that’s it! They’re all the sounds of English! Yay! Wait… hold on.. what about if I take a sound like T and then another sound like R and put them together to make TR as TREE.

Oh oh, we need to understand:

There are lots of sounds in English that have two or even three combined sounds, like.

st as in star

str as in street

Now, sometimes the combined sound comes at the start of the word, like:

It’s a great idea to practice these combined sounds. This will really make you sound fluent. This is a real key. You can take our SpeakingLab 2 course at E2 English to practise these types of sounds.

So there are 24 individual sounds that use a part of your mouth like p, b, s, t… and another 20 sounds that don’t use your teeth, tongue or lips like a or e or oi.

We’re much closer to understanding what makes someone sound FLUENT in English. But now we need to talk about

Words have syll/a/bles – a syllable is the small little part of the word when you say it,

Now, there are a lot of words that have only one syllable or part, like:

There are also lots of words that have two syllables like:

There are also words with three syllables, can you hear them?

There are even words with four or even five syllables or parts – long words.

Now that we know what a syllable is – a little part of a word, we need practice the correct

Stress is not like being stressed at work. When we talk about fluency we’re talking about adding more emphasis, or a slightly louder sound to one of those syllables.

If we go back to our two-syllable words, listen to how I stress the first part of the

But look at this word: begin, it has stress on the second syllable. Why? Because it’s a verb.

So, there’s a cool little fluency rule here which is:

And if it’s a verb, stress the second syllable, like begin, present, decide

We’re getting closer to understanding what makes someone fluent in English. We have understood:

Sounds – there are 44 single sounds, and lots of combined sounds

Syllables – these are the little parts of the word. Some words have 1 syllable, some have 2, some have 3 or more.

Stress – this is which syllable we make a little bit louder

Understanding these three parts of spoken speech is key to sounds more fluent in English. You need to:

Watch our video on How to Become Fluent in English

This site uses Akismet to reduce spam. Learn how your comment data is processed.