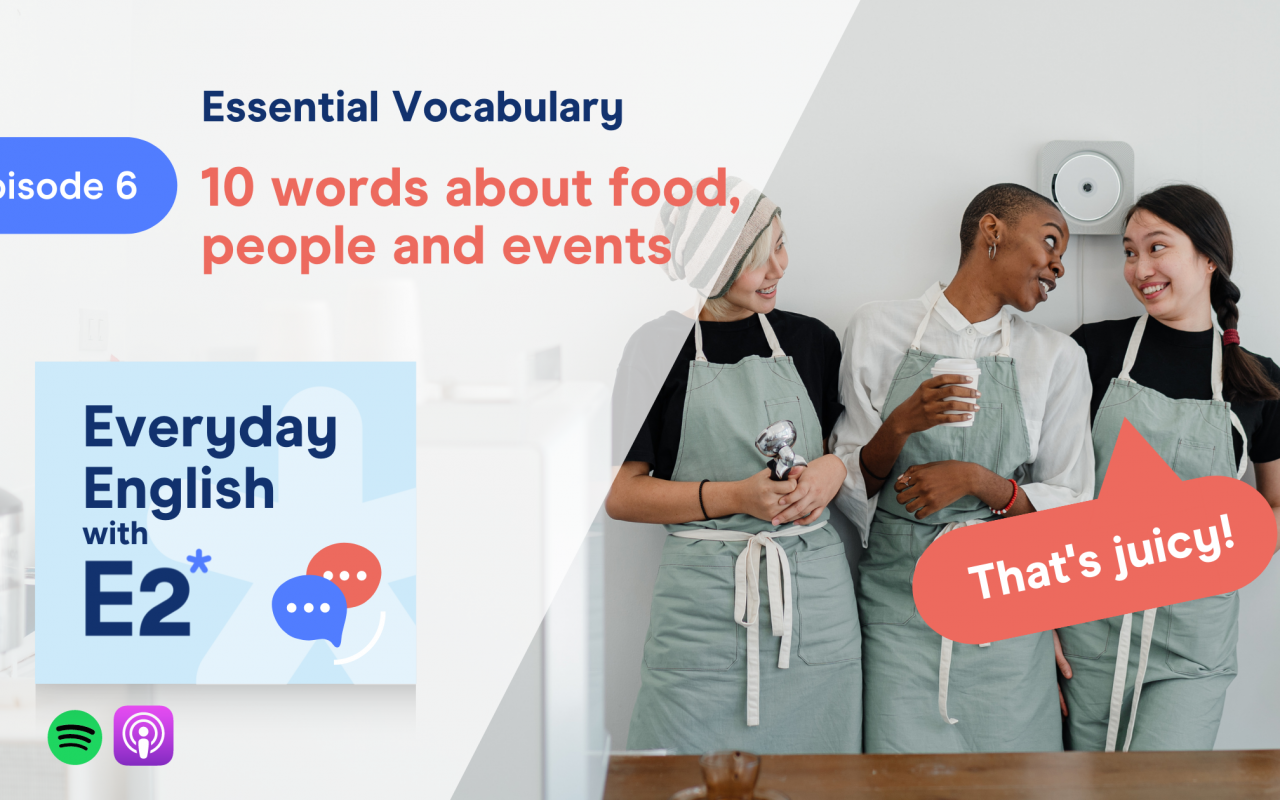 Hi there, Mark here. Welcome to Everyday English with E2. Each week, we focus on English grammar, vocabulary or pronunciation.

In this episode, we are going to focus on vocabulary and we’re going to learn 10 important adjectives that describe food, but also and more specifically, taste – but also how we can use these same words to describe people or events! For example, you can use “juicy” for gossip, or “rich” for an exaggeration, or “flaky” if someone is unreliable. These are all great words related to taste that we use in everyday conversation for other purposes.

Remember… if you need extra practice on your pronunciation – you can do this by going to www.e2english.com

Let’s start by talking about our first adjective: bitter.

How do you feel about eating broccoli, Brussel sprouts or radishes? Or have you ever tasted the skin of an orange or a lemon, not the orange of lemon, but the skin of the orange or lemon. All of these foods are bitter. The word ‘bitter’ actually comes from a very old word meaning ‘to bite’ because when you do bite into orange peel it kind of bites into you! So bitter comes from the word ‘bite’. And you know how else you can use bitter? You can use it if someone is feeling upset or resentful. You can describe that person as ‘bitter’. She is bitter because her boyfriend left her. Or he is bitter because she doesn’t love him!

The next word is cheesy. Now cheesy is an interesting word because you can use it two ways. You can use it to describe the taste of something that tastes like cheese, of course, like, pizza or pasta, but you can also describe someone or something as ‘cheesy’. And when you describe a person or an event as ‘cheesy’ it’s not because they taste like cheese, it’s because it kind of makes you cringe; you don’t like it… It’s, ah, unpleasant. But, again, for pizza or pasta or anything with a cheese flavour you make that adjective by adding the ‘y’ sound to the word cheese – cheesy.

Next up we have juicy. And this is a great word because it also has a double meaning. In terms of food you describe something as juicy when it has lots of liquid; it’s the opposite of ‘dry’. So, for example, if you are eating meat, you can describe it as juicy, or you can describe a piece of fruit as ‘juicy’ because it has lots of liquid. And you know what else is juicy? Gossip. So if you hear some gossip about someone and it’s really interesting – it may or may not be true – you can say that it’s juicy. You can even ask someone: Do you want to hear a juicy story? And then you can tell a story about someone cheating on someone or stealing something or doing something else. Juicy stuff!

Rich is a cool word with lots of meaning. Of course you know that rich means to have lots of money – to be wealthy, buy you can also use rich when describing food. The flavours can be described as “rich”. Usually foods that are very high in nutrients taste kind of ‘rich’; you can’t eat much of them. Now, there’s another meaning for ‘rich’ and that’s if someone tells a story and it sounds untrue; it sounds like an exaggeration.

Remember, if you want to improve your vocabulary then you can do that at www.e2english.com where we have general English courses form beginner to advanced that include listening, reading, writing and speaking as well as vocabulary. Be sure to check those online English courses out.

Next up we have salty. I only learned this word recently, but I like it. Of course, with regard to food it means having lots of salt, like pretzels or instant noodles or lots of fast food is high in salt and tastes ‘salty’, but a person can also be salty, and this doesn’t mean they taste salty. Here the word means that they are resentful. So imagine you are playing a game with someone and you win fair and square, not cheating, but the other person is upset, they’re resentful, then you can describe that person as ‘salty’.

What about ‘fishy’? Some people like the taste of fish and some people don’t. Do you like fishy foods? Me, I’m not a big fan. But I do like using the word ‘fishy’ in other ways and it means if something is suspicious. If something is suspicious then we can say that “it’s a bit fishy”. For example, let’s say your bicycle goes missing and then you see your neighbour riding a new bicycle that looks like yours. It’s ‘fishy’, right? Sure is… You’re suspicious. Now remember that the person not’s fishy but the whole situation is ‘fishy’.

Have you ever eaten something bland? Something kind of tasteless. It’s not spicy, it’s not salty, it’s not anything at all… it just lacks flavour. Maybe oatmeal or porridge is like this, or rice without anything else; it’s bland. So, of course, you’ve probably met some people in your life who are also ‘bland’ as well. Let’s say you go on a date. And… well, he or she is pretty boring. And your friend asks you: “How was your date?” Well, you can say, it was a bit ‘bland’.

What about sloppy? Food is often sloppy right? Think about curries or casseroles or any sort of sauce. When you stir it it’s sloppy… it’s a kind of liquid. You can almost hear the sound of the sloppiness. You know what else can be sloppy? Work. You ask someone to do something for you, like write a report or put together a spreadsheet and you know what? They do a sloppy job. Sloppy here is a funny way to say that what they did was not very good, not very thorough, not very well structured. It’s sloppy like a curry.

Fruity is a great adjective to describe the flavour of something that tastes like apples or oranges or pears or plums. But it can also describe someone who is a bit crazy. You can describe them as being a little ‘fruity’.

And we’ll finish with my favourite food word to describe someone: flaky. Flaky is a kind of texture of food. An example of something flaky would be the crust of a pie. It means it breaks or separates easily into small little pieces or flakes. Now, if I describe a person as being ‘flaky’ then it means that they are unreliable. You can’t count on them. They are not good at doing what they say they will do; they are flaky.

Cool, thanks for listening. Remember to check out www.e2english.com for our online English language courses to build your vocabulary.

Ep. 5 English Grammar – Understand Each and Every Indefinite Pronoun! with Jay

This site uses Akismet to reduce spam. Learn how your comment data is processed.