Ep. 5 English Grammar – Understand Each and Every Indefinite Pronoun! with Jay 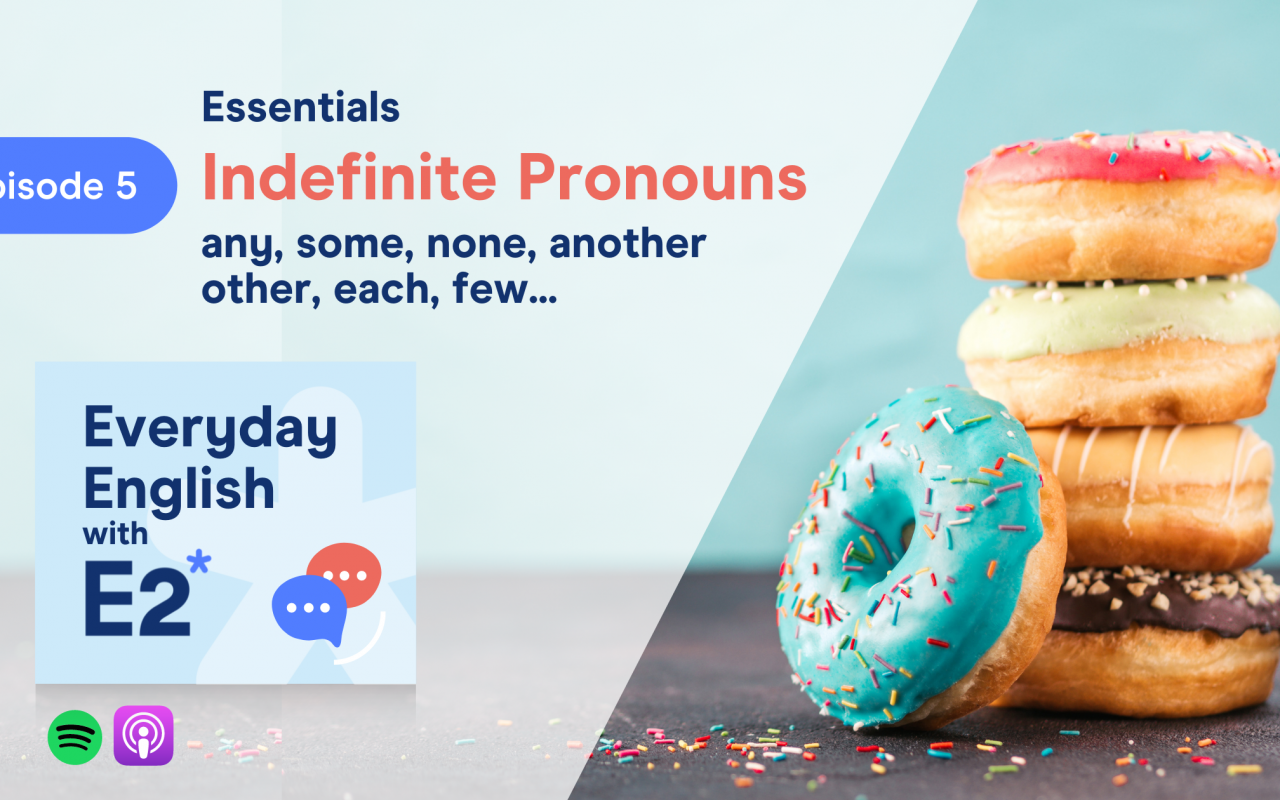 Hi there, Jay here. Welcome to Everyday English with E2. Each week, we focus on English grammar, vocabulary or pronunciation.

Remember… if you need extra practice on your grammar, including indefinite pronouns – you can do this by going to www.e2school.com

What are Indefinite Pronouns?

So what are indefinite pronouns? They are words like:

Some of these words might be easy for you, like “everyone”, so I’m going to skip those and concentrate on the tricky ones like “fewer”, “each” “both” and “neither”. Each of these words are very common and they each have a specific meaning. By learning the specific meaning you’ll be much more confident to use them and know that you are using them correctly.

Okay, so “Another” has a weird double meaning; it has two meanings. It means “one more” or it can also mean “a different one”.

So let’s imagine we’re in a donut shop. It’s the best donut shop in the city. There are chocolate donuts, strawberry donuts – all sorts of donuts. Of course, you can buy one donut – a single or singular donut – or you can buy multiple donuts, more than one, or ‘plural’.

Let’s say I eat a chocolate donut and it is DELICIOUS. I mean, it’s the best donut I’ve ever had so I decide to order “another” one. I order one more. So “another” here means ONE MORE.

But let’s say my friend orders a peanut butter donut and it is DISGUSTING. Seriously. It’s gross. She can’t eat it. So she takes one bite and then decides she wants ANOTHER one. For her, ‘another’ means a different one.

So I want another chocolate donut – one more. But my friend wants another donut – a different one because she can’t eat the original one.

This is one example of the interesting meanings of indefinite pronouns.

Now, before we move on I want to talk about WHY these words are called pronouns. What is a pronoun? Well, when you think of a pronoun you’re thinking of a word that represents a noun. So, if I take a noun like “donut” – this is a thing in the world, I can call it by its name “donut” or I can call it using a pronoun like “it” or “another” or “one” or it might be included in a group of donuts like “both” or “each”. Can you hear how the pronoun replaces the noun? We don’t need to say donut, donut, donut – we have different ways to refer to the donut.

Ok, before we move to the next indefinite pronoun, let me remind you that you can find full episode transcripts at the e2 english blog. These are great for reading along as you listen or going back for clarification.

Anyway, onto the next indefinite pronoun.

Okay, “each” is an interesting pronoun. To understand how to use “each” we need to imagine the donut shop again, and this time we’re looking at a lot of donuts. There are 100s of donuts in this shop – all different flavours. And you know what? I want “each” of them. So what I’m doing with “each” is referring to the individual donuts within a larger group of them. I can pick out single donuts from all of the donuts and refer to a single donut as “each”.

Ah, did you hear what I said there? Each looks. Each looks. What’s going on with the grammar here?

Well, when we use “each” we are referring to one, or singular. One looks. One thing looks. Two things look – no ‘s’. So ‘each’ is singular; therefore, we make sure we’re using the verbs:

Each is… as in, each is delicious.

Each has…. As in each has cream in it.

Not all indefinite pronouns are singular, though, we will meet plural pronouns later on in this episode that are different.

We use the word ‘either’ when we don’t mind which one. We don’t really care. So let’s say your friend brings two donuts to the table: a chocolate one and a strawberry one. She asks you: Which one do you want? And you say: either, I don’t mind.

This means that you don’t care if you get the chocolate one or the strawberry one. One, or the other. It’s all good to you.

Next up we have:

Okay, so we’ve looked at ‘either’ that means one or the other. Neither, on the other hand, means not this one or that one. Or, as we say: neither this one nor that one. You don’t want the chocolate donut or the strawberry donut! None. Zero. You want the peanut butter donut!

So if you are presented with two options and someone asks: Which one do you want? And you don’t want any of them. They both look gross, then you can say: neither. Not this one, and not that one.

But what about this “nor” word. It’s a funny word. It is only ever used with the word ‘neither’. So you will hear “either / or” and you will also hear “neither / nor”. In a phrase, you can say: I want neither this donut nor that donut, which means you don’t want any of the two.

Remember if you want help with your grammar then check out www.e2school.com / www.e2english.com Here you can sign up for our free grammar course for lots of practice on your laptop or your phone to help your boost your confidence! Let’s look at the next indefinite pronoun:

Both do look good.

So, in your mind, think of ‘both’ as two things, not one, and then the grammar will magically happen for you.

I’m putting ‘few’ and ‘several’ together here because they mean pretty much the exact same thing. If you say: I want a ‘few’ donuts or I want ‘several’ donuts, the meaning is the same. The formality, however, is a little different. Few is used in everyday speech whereas ‘several’ is more formal so you might see it more in writing.

In terms of meaning, they both refer to a number that is not one, not two, possibly three, four or five, but not a large number. And the number is not specified. That is, it’s not an exact number. It could be between 3 and 5, perhaps?

There’s a little difference in grammar between the two words. When you use “few” you need to use an article “a” so you say: Can I have “a few” donuts, please? Whereas, with ‘several’, you don’t need an article. You just say: Can I have “several donuts”, please? Of course, you wouldn’t say this to someone working at the donut shop because they will be confused. How many do you want? Again, ‘few’ and ‘several’ are unspecific.

Let’s compare them with…

A couple means ‘two’. This a specific number. Of course, in everyday language, we think of a ‘couple’ as a boyfriend and girlfriend – two people, a ‘couple’, but like all pronouns, we can use them to refer to things as well, so I can say: Can I have “a couple” of donuts, please? And this is specific; this means two. The donut seller will know exactly how many you want.

Okay, this one is interesting and I’m sure if you understand the word ‘fewer’ you will understand it better than almost all native English speakers who often make mistakes with this word.

To understand ‘fewer’ we need to understand something a bit weird about English and that is how we make a distinction between things we can count, like one donut, two donuts, three donuts, and things we can’t count like water, air or butter. You can’t say one butter, two butter, three butter. For some reason, we think about some things as ‘countable’ – able to be counted, and some things as ‘uncountable’ – not able to be counted. And this is where the word ‘fewer’ comes into play and this is where we use it with ‘less’.

Fewer donuts in the shop, fewer cars on the road, fewer ideas in my head. Then you have less butter in the fridge, less water in the tap, or less homework after school.

Look… to be totally honest, it doesn’t matter if you say I have fewer donuts or I have less donuts. Native speakers will totally understand you because they often don’t distinguish between the two either, but if you do use ‘fewer’ and ‘less’ correctly, well, it sounds really good.

Any is a strange little word. We use ‘any’ to refer to a thing or things or stuff and we are being non-specific about it. We don’t mind. We’re just curious. So I might say: Are there ‘any’ donuts left in the fridge? Here I’m not referring to a specific number of donuts, I just want to know if they exist anymore! Or did someone eat them all!? So I can use ‘any’ with countable nouns like donuts, or I can use ‘any’ equally as well with uncountable nouns like water, time or space such as: Do you have any time after work to meet? Or, do you have any water left? Or, is there any space in your bag for my t-shirt.

I’m just curious about whether or not there is or there isn’t something. That’s when I use ‘any’.

Lucky last, and this is kind of formal one:

Such… there are two ways to use such. We can use ‘such’ as an intensifying adverb to make something seem more intense, like: That was such a good game?! Such here adds emphasis to the adjective ‘good’. It was such a good game. Or sometimes we use ‘such’ when we want to give an example of something, such as… ah, did you hear how I used ‘such’ there? I talk about something and then I say: “such as” before providing the example.

Let’s say, I want to talk about donuts. I might say, “There are lots of donut shops in the city, such as “Dunkin Donuts”, “Daniel’s Donuts” and “Fair Dinkum Donuts”. So I provide an example or examples by using “such as”.

And, one more thing I’d like to mention before we wrap it up is a cool phrase, which is “Such is life.” Such here refers to everything that happens in life, the unpredictability of life. So if something strange, unfortunate or even fortunate happens to you, you can say: Such is life.
Great! Thanks so much for listening in. Hopefully you found some of that helpful. Remember to check out www.e2school.com to put some of this information into practice. See you in the next episode!