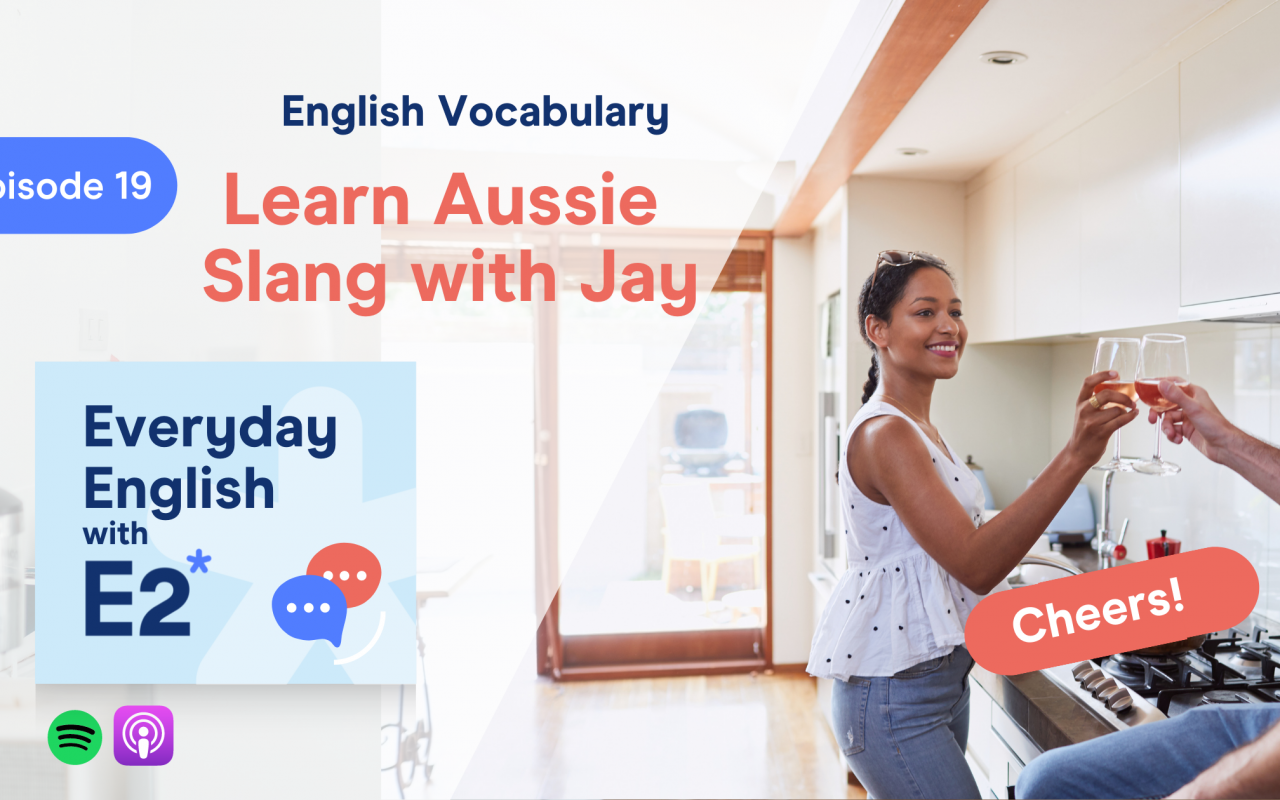 Hello and welcome back to another episode of Everyday English with E2. My name is Jay. Each week, we focus on English grammar, vocabulary or pronunciation, and this week it’s all about vocabulary, or as an Australian would call it – vocab! That’s right, us Australians love to save time by making words shorter, and I’m going to teach you all about how we shorten them, take you through some common shortened words, and even how you can get yourself a true blue Australian nickname.

But before we get going and learn Aussie slang, remember that you can check out www.e2english.com anytime if you want to improve your fundamental English – your grammar, vocabulary, pronunciation and even spelling. It’s free to sign up! Just click the link below this podcast.

Ok, first off, you may have heard the word ‘Aussie’ before. That’s short for Australian. We keep the first syllable, Aus, then add a suffix, ‘ee’, on the end. But don’t fall into the trap of saying ‘Aus-sie’. When it gets shortened, the ‘s’ changes into a ‘z’ sound: Aussie. There are a couple of other shortened words that rhyme with Aussie. Can you guess what these are?

Mozzie. That’s short for mosquito. For example, “I should have used more mozzie spray at the barbecue – I’ve got mozzie bites all over me!”

Cozzie. That’s a tricky one. It’s short for swimming costume, also known as a bathing suit. For example, “Oh no, I went swimming in the lake and got a mozzie in my cozzie!”

Yep, Aussies will take pretty much any long word, get rid of everything other than the first syllable and chuck an ‘ee’ sound on the end to make it quicker and easier to say. Here are a few more common ‘ee’ words:

Postie. This is short for postman, also known as a letter carrier or mailman. The bonus here is that while ‘postman’ is gendered, a postie can be a man or a woman! Yes, the person carrying the mail can be male or female!

Footy. This refers to Australian football, or AFL. You can “play footy” or “love footy” but if you’re talking about an actual football game, you’ll need to use an article, for example, “did you watch the footy last night?” And if you’re in Australia, you’d better say ‘yes’, because people love the footy here.

Biccy. This is short for biscuit, and refers to a cookie, not an American biscuit. You can even double up and go for a chocolate biscuit, or choccy biccy.

And of course, there’s the great Aussie tradition of the barbie. Nope, not the doll who enjoys pink legwarmers and hanging out with Ken, but a barbecue. A barbecue, or barbie, is a social event where friends or family gather in a backyard, and grill or barbecue meat and vegetables. And it’s not an Aussie barbie without our national dish: a sausage on white bread with tomato sauce!

Now, if you get invited to a barbie, you might hear something like this: “Come over to my place on Saturday arvo.” What on earth is an ‘arvo’? Well, it’s short for ‘afternoon’. But be careful, because there’s another Aussie word that sounds very similar, and that’s ‘avo’. Avo is short for avocado. So you could say, “I’m making guacamole tonight, so I’ll need to buy an avo this arvo.”

On your way to the barbie, you may also need to pop into the bottle-o. Any idea what this one means? It’s actually short for bottle shop, which is an Australian way of saying a liquor store or off-licence – somewhere to buy beer, wine or spirits.

And if you prefer your drinks a little less alcoholic, you might just have a cuppa instead. Cuppa is short for ‘cuppa tea’ or ‘cup of tea’. And it goes very nicely with a choccy biccy. Mmm!

Finally, if you didn’t have enough to eat at the barbie, you may need to pick up a cheeseburger or some nuggets at Macca’s. Can you guess what that might be short for? That’s right, Macca’s is how Australians say McDonalds! This is a legitimate abbreviation – in fact, you’ll sometimes see the word “Macca’s” printed on actual signs outside McDonalds restaurants.

If you’re finding any of this a bit confusing, or if you find English confusing, then remember to check out www.e2english.com and check out our English language courses including grammar, vocabulary and pronunciation.

Alright, it’s quiz time! What are the Aussie versions of these words?

Okay, ready for the answers?

Number one was chocolate biscuit, or choccy biccy.
Number two was mosquito, or mozzie.

Number three was afternoon, or arvo

And number four was very similar – that was avocado, or avo.

That was a tough quiz – I reckon you deserve a cuppa after that, or maybe even something from the bottle-o!

Now, it’s not just objects that get shortened in Australia – we do it to people’s names too. My name is already pretty short, but if you have a longer name, prepare for your Aussie friends to come up with a short nickname for you to save them valuable time every time they talk about you. Usually, Aussies take the first syllable of someone’s first name or surname and add an -o, -ee or -a sound to it. For example, if your surname were MacDonald, you’d be known as – you guessed it – Macca!

If the first syllable ends in the letter R, it doesn’t sound too good with an ‘o’ on the end though. Instead, we replace the ‘r’ sound with a ‘z’ sound and add an A, so Barry becomes Bazza, Sharon becomes Shazza, Warren becomes Wozza and Cheryl becomes Chezza.

And if your name ends with an -ee, -er or -ay sound, we might just be lazy and not pronounce that syllable at all. So Stacey becomes Stace, Peter becomes Pete, and Jay becomes… Juh. I might stick with Jay, actually.

Can you give your name the Aussie treatment?

I hope you enjoyed learning about a few of the shortened words Australians use in their day to day lives. If you plan on visiting Australia, they’ll definitely come in handy! And if you are planning on travelling to an English speaking country or you just want to brush up on your grammar, vocabulary or pronunciation, make sure you head to www.e2english.com and sign up for our free online courses.

We are now on TIK TOK, practise live with Louisa!

In case you missed our last episode of Everyday English with E2:

Ep.15 English Vocabulary – Introduce yourself in English like a PRO with Jay