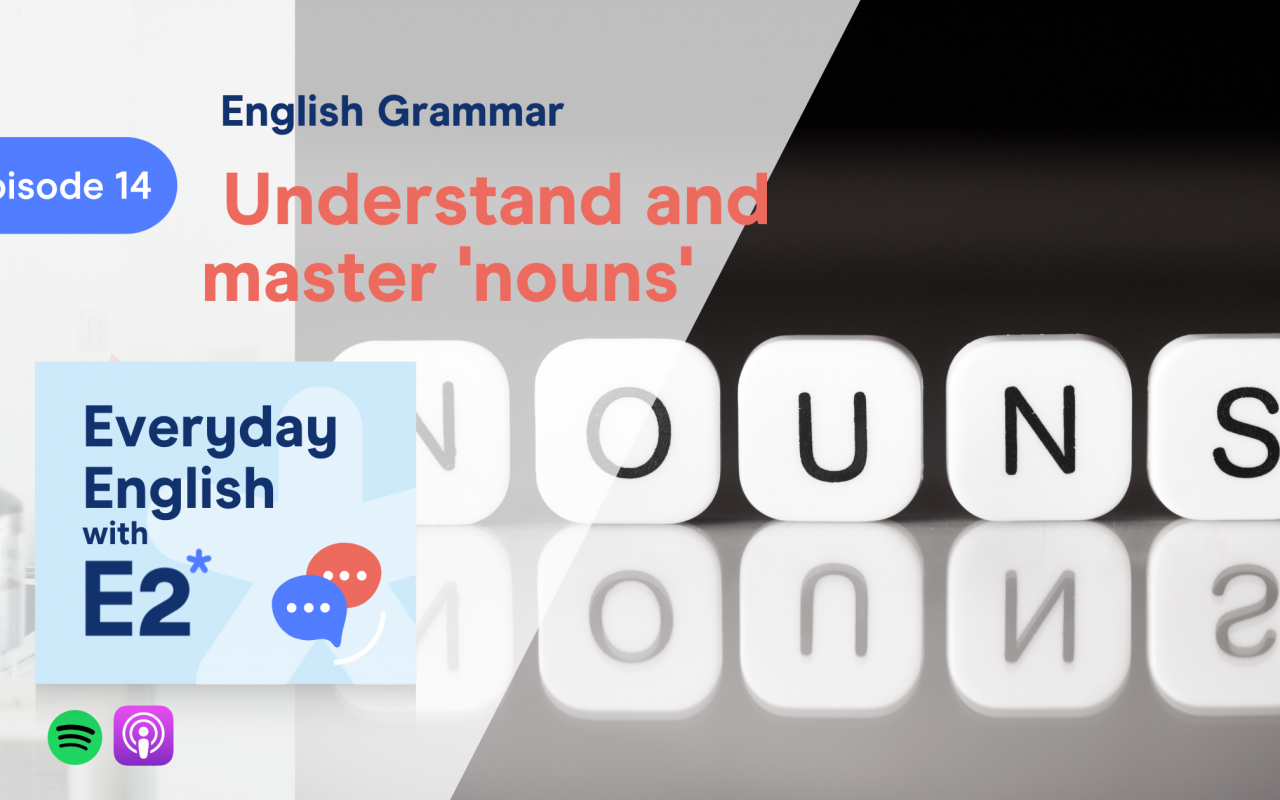 Hi, my name is Mark and this is the Everyday English podcast with E2. Remember to subscribe to this podcast and also check out www.e2english.com if you want to improve your English grammar, vocabulary or pronunciation.

Today we’re talking about something that might seem simple but is in fact quite complicated, and very interesting. We’re going to talk about ‘nouns’.

Put simply, a noun is a thing. Right? But the problem is that in English there are different types of things and the English language changes depending on the type of thing you’re talking or writing about.

For example, in English, we distinguish between one thing and multiple -or more than one- thing – in other words, singular and plural nouns.

In this episode, we’re going to explore the wonderful world of nouns. If you listen carefully, this will help to improve your understanding and use of English and give you some interesting ideas to think about as well…

Alright, let’s start by talking about the weird world of singularity and plurality…

Listen to the way the noun changes to reflect whether we are talking about one thing or more than one thing – singular or plural.

Milks… whoop, hold on. That doesn’t quite work. Not all nouns can be plural. That is, not all things can be classified as more than one – but we’ll get to that in a minute.

Putting an ‘S’ on the end of a noun in English is crucial if you want to sound accurate. English speakers are very particular about doing this and when someone forgets to add the ‘S’ to show ‘plurality’ or ‘more than one’, it sounds terrible. You have to try to get this right.

Let’s play a game. I’m going to say the singular noun and I want you to say the plural nouns. Ready?

What’s going on here is that for some reason some words are ‘irregular’. That is, you can’t just add an S on the end. To talk about more than one mouse, for example, you need to say or write “mice” – mouses would be odd.

Sometimes you will hear children make cute little mistakes when they say something like “I saw the mouses, daddy”. And, they’re actually being incredibly smart – they’re applying the rules of grammar to the noun; they’re adding an ‘S’ because it’s the logical thing to do, but sometimes English isn’t logical.

Here are a few irregular plural nouns in English:

As you hear, there are no regular endings for irregular plural nouns. You just have to listen and read and begin to pick them up.

Well, it makes sense, and people will understand you, but you’re kind of breaking a weird rule in English known as ‘countable’ and ‘uncountable’ nouns.

Think about it… a noun can only be plural if it’s countable… That is, if you’re looking at some THING, such as a camera, you can say “one camera” and then you can say “two cameras”, “three cameras”, “769 million cameras” and so on. So the word camera is both countable – we can count how many cameras there are, and as such, it is also able to be ‘pluralised’.

Well… it’s cool until you meet uncountable nouns like milk, sand and music.

One way the logic of uncountable nouns is taught is because of the ‘substance’ of these nouns. Cameras, on the one hand, are hard plastic or metal objects. That’s why they’re easily countable. Milk, on the other hand, is a liquid. So many ‘liquids’ are considered uncountable, such as water, beer and even honey.

Of course, if you’re talking about bottle of water or beer of jars of honey, then, all of a sudden, these liquids can be counted as in “three waters”, “two beers” and “ten honeys”. So, the rules are not tight.

Powders are also often considered ‘uncountable’, as in sand, sugar and tea. So, it can be weird to say “sands”, “sugars” and “teas”, unless of course the sand, sugar and tea have been ‘contained’ in packets or boxes – then you can pluralise them. For example, it’s very common to hear a waiter say “How many sugars do you want in your coffee?”

And lastly, materials and substances… paper, information, electricity, and music.

But really, these rules are not set in English. In one sentence a noun will be uncountable and in the very next sentence, the noun will be countable.

Reconsider this sentence, for example:

My tip is to pay close attention to context. By knowing the basis of singular and plural and countable and uncountable will help you to get a strong understanding, but then of course it’s about the rules and the exceptions.

Now, there is another distinction in English between nouns, and that’s concrete and abstract nouns. But there are no real grammatical rules that are affected here. What you need to know is that concrete nouns refer to things in the world that you can see, hear, taste, touch and/or smell – such as camels, windows or anything you can see right now, whereas abstract nouns are things that are immaterial… they don’t ‘exist’ in the real world, per se. Some examples of abstract nouns include “bravery”, which is a thing, right? And “zodiac signs”, which is… well, maybe you don’t believe in them, but they’re still a ‘thing’ in their own right’, and “the economy”, which is also a thing, albeit a very abstract one.

Remember, if you want to practise your English and improve your ability to use the grammar of nouns correctly, then check out www.e2english.com where you can sign up for free to your general English courses.

My name is Mark and I’ll see you soon!

We’re now on Tik Tok! Follow us and keep up with the latest English language tips

In case you missed our last episode of Everyday English with E2: