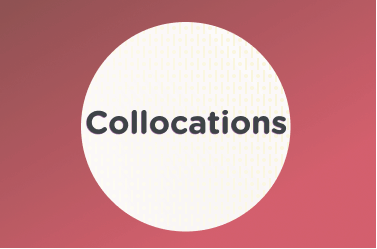 Collocations are words that go together. The prefix “co-” means together (as in co-operate, committee, company). “Location” is a formal word for “place.” The Oxford Dictionary describes collocations as words that are “habitually juxtaposed”. I think it is more helpful to call them words that often go together.

Why are they called a collocation?

“Collocation” is an example of language-learning jargon. Most native English-speakers wouldn’t know what a “collocation” is. They would simply call them “words that often go together” if they recognised them at all. Collocations sound right. If we put the wrong words together, words that don’t “collocate” they sound strange or wrong.

There are many types of collocations. Some of these are:

(Americans say “take a shower”. Both collocations are correct. One is more common in British English and the other is more usual in American English. The meaning is exactly the same. The difference is only about habit and most common usage. It is not important)

How to learn collocations

It is useful to learn new vocabulary with its associated collocations, both words that come before and words that come after. For example, if you were learning the word “dentist”, it would be good to learn associated collocations such as “go to the dentist”, “make an appointment to see the dentist” and “dentist’s chair”. In general it is always good to learn “chunks” of language” rather than individual words. It is also good to think of other collocations from the same word family such as “dental treatment”, “orthodontist” and “dental work”.

Sometimes there are collocations in your first language that are quite different in English and it can be quite difficult to break the pattern of expressing your ideas in the way that you are used to. In Spanish, people say “ She has thirty years” rather than “She is thirty” or “She is thirty years old”. It sounds odd in English and, while people will probably understand you, it has a negative effect on their perception of your ability as an English speaker.

When we use the wrong collocations, it sounds very strange. We don’t say “quick food” for example, even though the meaning is essentially the same as “fast food”. Similarly, we don’t say “explode into tears”, “strong rain” or  “lose time”, we say “burst into tears”, “heavy rain” and “waste time”. People would probably understand your meaning if you used the words that don’t  go together  or “collocate”. However, it would sound weird and it is not the way a native English-speaker or proficient speaker would say it.

Notice collocations. Practice them and use them. Before you know it, they will become second nature.