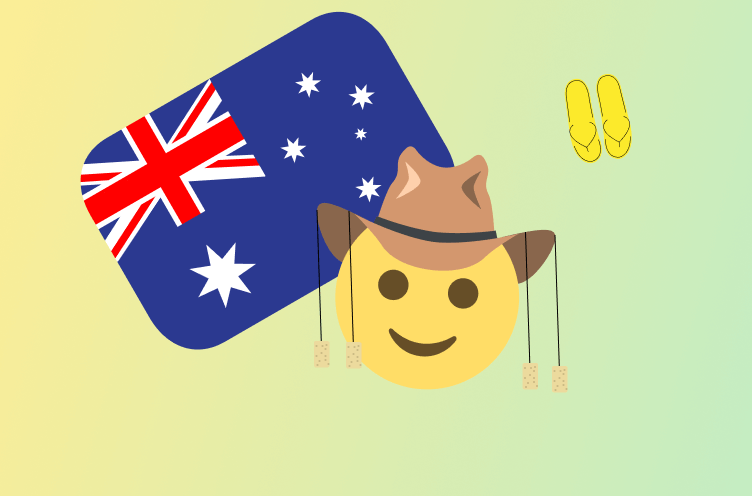 Most Australians, I mean Aussies, are inclined to shorten words from the English vocabulary. This has resulted in a wide-ranging, endless collective library of Aussie slang terminology.

O’s and Ee’s – The Suffixes of Slang

In general, Australian slang can be divided into two popular suffixes: Ee’s and O’s. By adding an ‘o’ onto the end of most words and you are bound to sound Australian.

Arvo: Meaning ‘afternoon’. The initial arv sound in ‘afternoon’ is abbreviated and an ‘o’ is added to round off this colloquialism.

Bottle-o: Meaning ‘bottle store’ or liquor store. The original phrase ‘Bottle Store’ was seemingly too tedious for the Aussie dialect. Aussies shortened the word ‘shop’, replacing it with the letter ‘O’. Too easy.

Similarly, the same philosophy applies to ‘service station’, often referred to as a servo. Want extra avocado with your meal? Extra avo! And so on. Don’t worry you’ll get the hang of it!

There are many, many more examples of this practice that can be cited endlessly. It is very likely that in the time it takes to read this article, more O’s have been added to the end of words.

Similarly, the ‘Ee’ sound is fixed onto the end of words, shortening them and saving time.

Now don’t get ahead of yourself and think that after reading this you’re a certified fair dinkum, true blue Aussie. The majesty of Aussie slang lies in its unassuming, friendly and at times unpredictable nature. You still have a ways to go before calling yourself a true colloquial conquistador.

Here are some more slang terms to add to your arsenal of Aussie appropriations:

Barbecue → Barbie
Used in a sentence: Chris invited me to the barbie on Saturday.

Chicken → Chook
Used in a sentence: The potatoes are ready, but the chook is still in the oven.

Cigarette → ‘Durry’ or ‘Dart’ or ‘Ciggie’
Used in a sentence: Hey Eric! Lets go for a quick ciggie break?

Slippers or sandals → Thongs (I know what you’re thinking!)
Used in a sentence: Go grab your thongs, we’re heading to the beach.

Friend → Mate
Used in a sentence: How you goin’ mate?

Utility Truck → Ute
Used in a sentence: Thanks for lending me your ute mate!

Service station → Servo
Used in a sentence: I’m going to get some gas from the servo.

McDonalds → Macca’s
Used in a sentence: Let’s go for a midnight Macca’s run?

No Problem → No Worries
Used in a sentence: When someone says “thank you” to you, you can simply reply with “no worries”.

Toilet → Dunny or Bog
Used in a sentence: Could you please give me the directions to a nearby dunny?

Kangaroo → Roo
Used in a sentence: A female Roo carries its young in the pouch.

Sandwich → Sanga
Used in a sentence: I made a cold chicken sanga for dinner last night!

Chocolate → Choccy
Used in a sentence: Who doesn’t love a little choccy after a meal?

Beer → Cold one or Coldie or Frothy or Stubby
Used in a sentence: Let’s head to a bar and grab a frothy.

Devastated → Devo
Used in a sentence: I’m pretty devo about failing my exam.

Football → Footy (and by that we mean Aussie rules)
Used in a sentence: Did you watch the footy last night?

So if you’re planning to explore Australia on a holiday or apply to Australian universities, you need to be aware of the enigma that is Aussie slang. These words will help you in the world of confusing colloquial Australian discourse.

Fun Fact: Did you know that the word “selfie” came from Australia? Yes! You can thank us later 😉

Feel free to add in some common Aussie slang words in the comment section below.