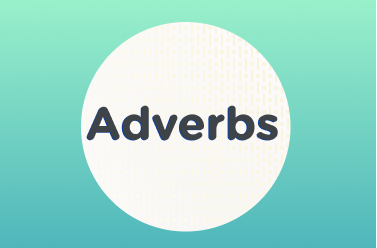 What is an adverb?

How do you form an adverb?

Very often, adverbs are formed by adding “-ly” to the end of an adjective, for example, bad, badly, smooth, smoothly, intelligent, intelligently. With adjectives that end in “-y”, the “y” changes to “i” before the “-ly” is added, for example, happy, happily, lucky, luckily.

Sometimes it sounds strange to add “y’ so we don’t say “sillily”, for example. In these cases we can always say “in a silly way”. This expresses the functional meaning of an adverb in another way.

Are there irregular adverbs?

Some adverbs are irregular. These adverbs don’t change from the adjective form: fast, hard, late, early, daily, straight. Therefore, we can use them in both ways.

Emma is a fast runner. She runs fast.

Carter is a hard worker. He works hard.

In fact, there is an adverb, “hardly” which means “almost not at all”. This is why sometimes people ask: “Working hard or hardly working?” The two options are opposite in meaning. The adverb form of the adjective, “good” is “well”. However, in spoken English, especially in American English, people often use “good” as an adverb although this is not really correct grammatically. Many speakers of American English will say, when speaking about someone’s performance: “She did good.” rather than “She did well”.

Just to make life difficult, “well” is also an adjective, meaning “not ill”. When someone asks “How are you?”, we often respond “good”, which is really a comment on our behavior, not our health. “I’m good” really means that I am not badly-behaved, not naughty.

Can adjectives be used as adverbs?

Another adjective/adverb mix-up happens with “real” and “really”. In British English “real” is an adjective and can only be used with a noun, for example, “It was a real diamond” (not a fake). American English speakers often use it as an intensifying adverb in sentences like: “That dinner was real good” where other English users would say “That dinner was really good”. If we can combine these two trans-Atlantic variations, when asked how they are, Americans might say “Real good”, while others might say “Very well”.

Some adverbs are used as intensifiers to give adjectives more weight. For example, we can say: hot, very hot and extremely hot or big, very big, extremely big. We can also use other intensifying adverbs or adverbials such as “fairly”, “a little bit”, “quite” and “really”. We use these intensifiers with gradable adjectives, that is, adjectives that can be graded. It is possible for things to be very hot or extremely big but we can’t say “very boiling” or “extremely enormous” because “boiling” and “enormous” already include the meaning that the degree to which the adjective applies is extreme. These adjectives that can’t be intensified with “very or “extremely” are called extreme adjectives because they already have that meaning built in. If we want to give them extra emphasis, we can say “absolutely freezing” or “absolutely tiny”.

We can use a verb and an adverb as an alternative way to express the same idea as an adjective as a noun, for example:

This is especially useful in formal writing and particularly in Academic IELTS Writing Task 1. It allows us to avoid repetition and have variety in our language.

Imagine a line graph which shows a series of rises and falls in prices, for example. We can write:

There was a sharp rise in prices (adjective + noun)

The meaning is the same but by using this simple change to the grammatical structure of the sentence, we get variety, which makes an otherwise dull description, more interesting to read and demonstrates the writer’s ability to use a variety of language.

By using synonyms, we can say the same thing in many different ways:

There was a sharp rise in prices

There was a dramatic increase in prices.

There was steep growth in prices.

We can mix and match the various adjective and noun and verb and adverb pairs so that there are 18 different possible combinations. They all express the same fact but we can have variation, which IELTS examiners love, and not have any repetition, which examiners don’t like.