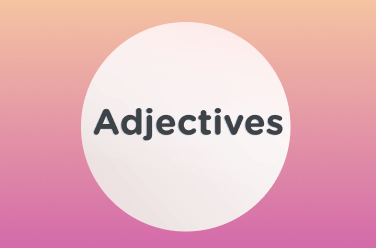 What is an adjective?

How do adjectives work?

Let’s compare a short passage of writing, firstly without adjectives:
The woman walked on the beach. The sun was setting. She saw a turtle swimming in the sea. The sun went down.

How do I use adjectives?

As well as using adjectives before nouns we can use them after certain verbs, such as “be” or “seem” to describe a particular subject, for example, “The sky is blue”, “I am hungry” or “You are enlightened about adjectives.”
We can put three or four or even more adjectives in front of a noun. We need to separate them with a comma. There is a standard formula for the order in which we use them, according to their general category. This order is opinion, size, age, shape, colour, origin, material and purpose.

Obviously, we don’t often include all of the types of adjectives at one time. However, we maintain this order. It sounds very unusual in English if we don’t. Here is an example: A beautiful, small, nineteenth-century, round, black, French, oak dressing table. If we changed the position of even one adjective, a native speaker of English would find it very unusual.

Let’s try it with a simpler example. We say “a beautiful, big, black dog”. We don’t say “a black, big, beautiful dog”. It simply sounds wrong. Nearly all native-speakers of English don’t know about the rule for the correct order of adjectives. They just do it without thinking. They recognize if it sounds wrong and they correct it. You can do the same. Trust your instincts. If you say something and it sounds wrong to you, it probably is. This ability to hear mistakes in your own English is a major achievement. Feel good when it happens. Correct the mistake to what sounds correct. Self-correction is a wonderful and natural thing.

How do I form adjectives?

As well as standard adjectives such as big, happy and exciting, we can also make comparative and superlative adjectives. We use these when we want to say if something has more of a particular quality than another or if something has the most of a particular quality in a group. For example, big, bigger, the biggest, or happy, happier, the happiest or exciting, more exciting, the most exciting.

What are comparative and superlative adjectives?

There are some simple rules for forming comparatives, which compare two things, and superlatives, which say which has the most of a particular characteristic.

We use ”than” when comparing two things, for example, “The house is bigger than the garage”, “I’m hungrier now than I was an hour ago”, “That movie was more interesting than the one we saw last week.”

Is it a noun? Is it an adjective?

Sometimes nouns can function like adjectives, in other words, they do the same job as them. A good example of this is “a guide dog”. While guide is a noun, in this phrase, it gives more information about a noun in the same way that an adjective does. Sometimes they can function like nouns, such as when we talk about helping the poor or taxing the rich. “Poor” and “rich” are adjectives but here we are using them as nouns to denote rather than describe a group of people.

Our English is richer when we use adjectives.